The day the festival dream died 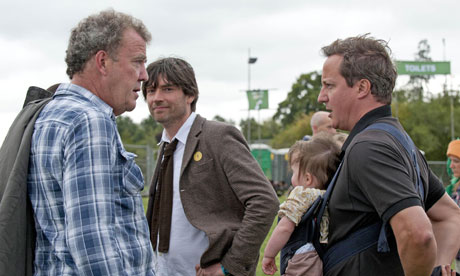 This, from The Guardian.

Alex James was the guitarist in Blur, now into cheese, apparently.

Posted by Motherhugger at 1:43 AM

Do you think David Cameron might be signally to a minder behind him, "Get me out of here - I can't stand talking to Jeremy Clarkson for another second"?

Perhaps.
And a bit OOT that the PM is described as 'swaddled' by a pouch. Perhaps some cheese is swaddle by flat bread nearby, but no-one is 'swaddled' in this pic.

Motherhugger
Sydney, Australia
I live in Sydney with my partner and three daughters. I'm interested in the intersections between mothering, feminism, activism, sustainability, the creative arts, literature, mythology and the ancient world. I love a hearty discussion, being challenged, and learning. I have qualifications in some of these, and am an English and Drama teacher.